Another year is in the books for Grand Ledge Yankee Doodle Days and for us at the Masonic Lodge in Grand Ledge.  For the past few years we have been asked to provide the food at the beer tent here in town.  So as usual we set up our booth in the back of the tent to food for the hungry patrons.

A very interested bit of information is that we actually flew these pigs in.  Wait for it….so I guess you can now say pigs have flown.

This year we did something a bit different.  We decided we would try and roast a pig and that we did.  Our brother Jeff spearheaded that big task and spent most of the night cooking it.  They put it on the roaster at around 10pm on Friday and Saturday at 11am it was ready for eating.

So during the parade we started to cut it up and prepare it for the many people that lined up to take part in eating it.  There were times when I looked over and there must have been at least 20 people in line.  A big thanks to brother Ed for keeping Jeff company and assisting him all night at the grill.

I don’t have the numbers for this years festivities but from the way the sales were going I think overall it was a big success.  The rain held off and it wasn’t overwhelmingly hot, making it pleasant to be one of the workers.  I want to again thank all of the workers that helped out this year.  A big thanks to all of the committees that worked on this for us. 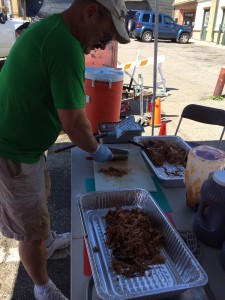 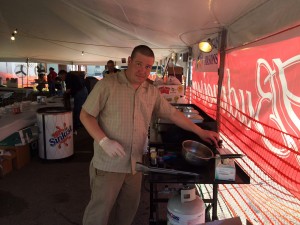